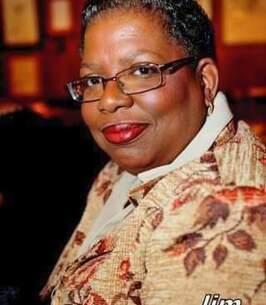 Sandra Denise Fisher Martin “Sandi”, the first of five children born to the union of Willie Thomas Augustus and Molly Marie Rodgers Fisher, was born on August 18, 1954, at the Rodgers family homestead in Creswell, NC. She made her transition from this life on September 6, 2022, at the age of 68 in her home in Glenarden, MD.

Having a military father, Sandi lived briefly in Augusta, GA and moved at an early age with her family to Washington, DC where they resided until 1965 when the family purchased their first home in Glenarden, Maryland.

In 1972, Sandi graduated from DuVal High School in Lanham, MD and attended Prince George’s Community College. She quickly realized after her first banking job that her early banking career was her intended career. Sandi worked in several banking institutions across the DC metropolitan area, including Universal Bank (formerly Prince George’s State Bank), the first African American owned and operated bank in the state of Maryland where she was considered the “face” of the bank. Her reputation there preceded her as strangers would enter the bank and would insist that only Sandi help them. She retired on July 1, 2022, from EagleBank in Rockville, MD and she indicated to anyone that inquired that “it was time”. Throughout her career, Sandi met and befriended many co-workers, customers, and “lounge” buddies, many of whom she has know since her very early days in banking.

In May of 1980, Sandi’s friend Paulette Waters introduced her to Logan Martin, the absolute love of her life. From that moment, the two were inseparable and six years later the couple wed on June 21, 1986. Sandi and Logan spent their entire lives devoted to building a life for their sons Raj and Aaron and establishing an unforgettable legacy. Together they turned passions into businesses and could be found travelling the area detailing cars or capturing memories through photography for events and special occasions. Sandi enjoyed learning and perfecting her culinary skills, and she and Logan became known as the family’s go-to grill masters for the annual reunion in Creswell, NC. After Logan passed, she carried on the tradition and recently passed the torch to the next generation, her younger cousins Keith and Karl Owens.

Anyone who knew Sandi, knew she loved her family unconditionally (her grandchildren were her heartbeats), she loved the Redskins, and she was mostly a homebody. Travelling was never at the top of her favorite things to do, however, when invited to vacation with her family in Hawaii, she jumped at the opportunity stating it would kick off the next milestone of her life—retirement. The week before her transition, Sandi had the time of her life in Hawaii with 17 family and friends. Before the trip, she excitedly spoke about the plans to anyone that would listen and when she returned, she spent her final days sharing the experiences she had with even more excitement. Family was not surprised when she introduced us to a new friend or when her “lounge” buddies greeted her by name in the hallway. Family nicknamed her the “Mayor of the Hale Koa” because it seemed she knew everyone, and they all just loved her. Those that travelled with her are forever grateful they spent such a fabulous time with her, even though no one knew it would be their last.